PLACES TO VISIT IN MYANMAR 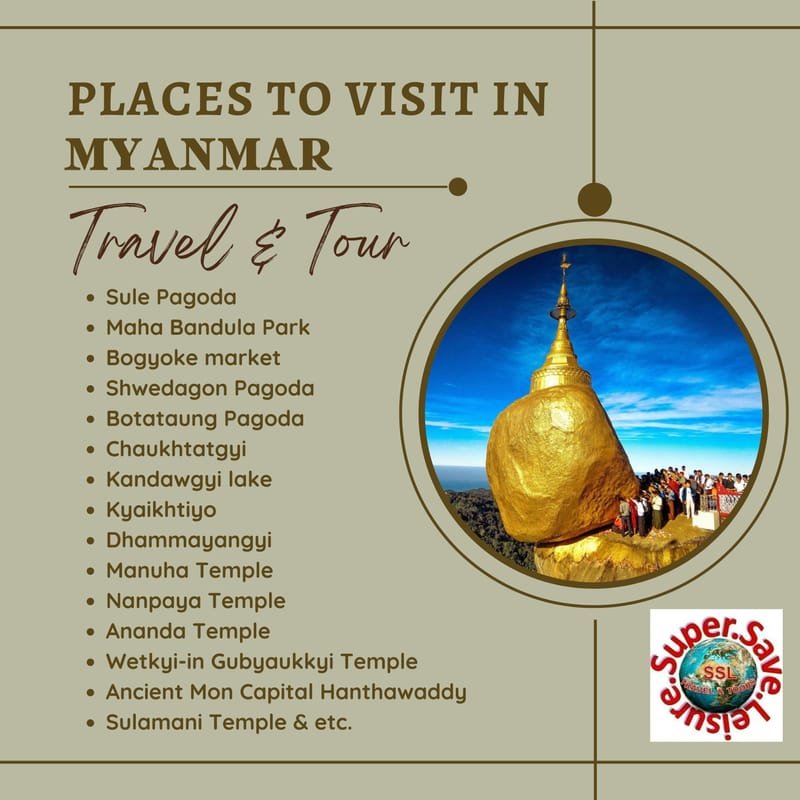 PLACES TO VISIT IN MYANMAR: 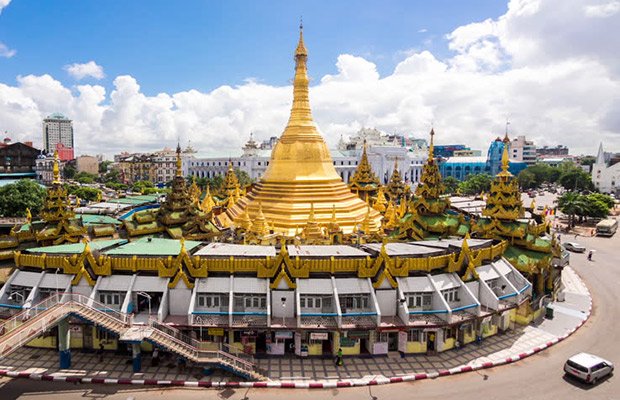 The Sule Pagoda is a tiny pagoda in Yangon's city center. The pagoda, known in Burmese as the Kyaik Athok Zedi, is bordered by bustling streets, a market, and colonial-era structures including as the Supreme Court and Yangon city hall. According to mythology, the pagoda was built some 2,500 years ago during the lifetime of Gautama Buddha. At the time, the pagoda was much smaller. Later Kings rebuilt and expanded it on various occasions. When it was restored halfway through the 15th century, the paya gained its current height.

The Maha Bandula Park or Maha Bandula Garden (Mahabandula or Mahabandoola) is a public park, located in downtown Yangon, Burma. The park is bounded by Maha Bandula Garden Street in the east, Sule Pagoda Road in the west, Konthe Road in the south and Maha Bandula Road in the north, and is surrounded by some of the important buildings in the area such as the Sule Pagoda, the Yangon City Hall and the High Court. The park is named after General Maha Bandula who fought against the British in the First Anglo-Burmese War (1824–1826), and includes the Independence Monument, an obelisk in commemoration of Burmese independence from the British in 1948. The park was formerly named Fytche Square in honour of the then Chief Commissioner of British Burma, Albert Fytche. The park is popular with t'ai chi practitioners in the morning and in the evening. 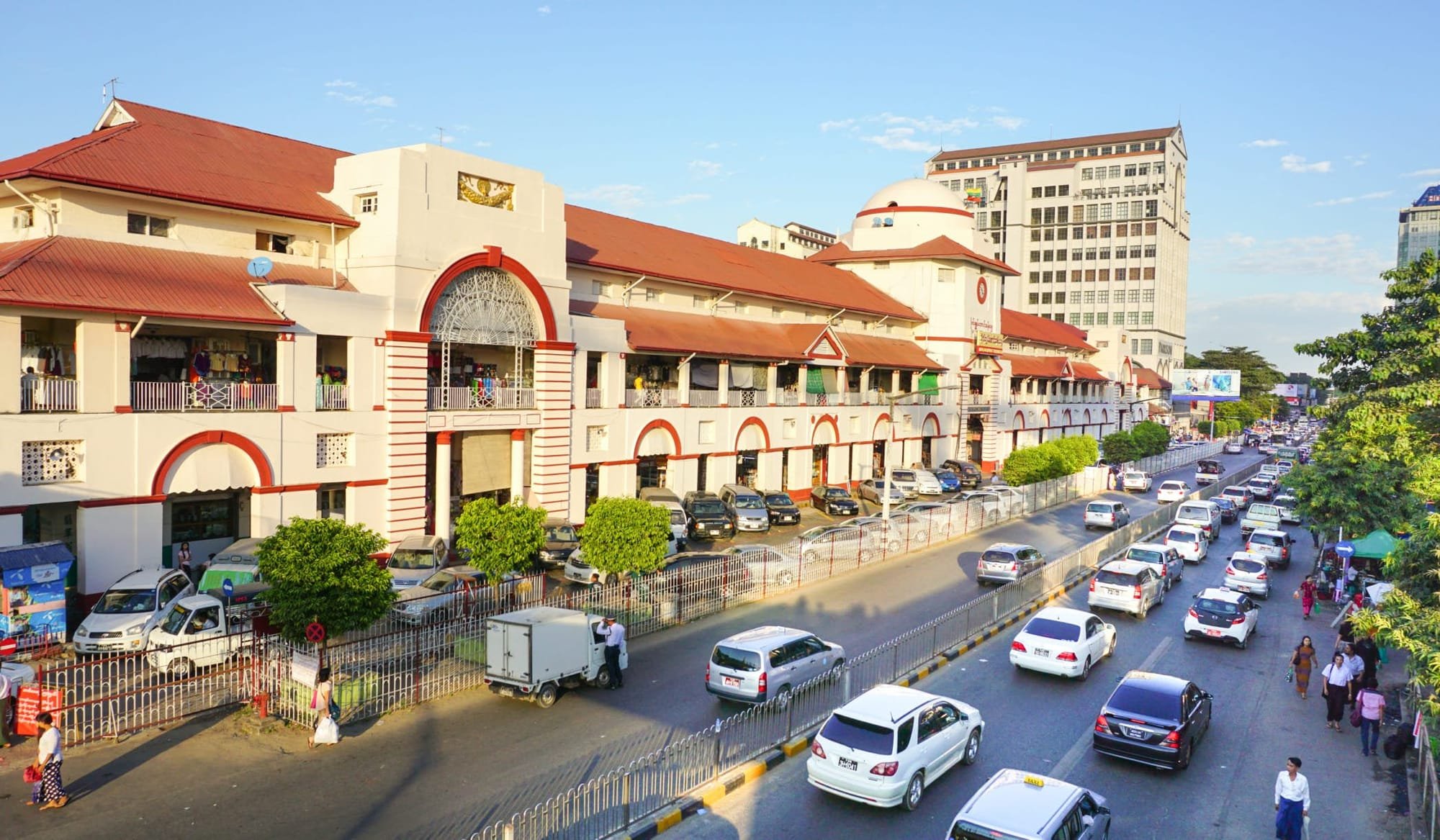 Shopping market with more than 2000 shops selling all kinds of products but of special mention is the beautiful exotic "Shan Bag" velvet slippers, lacquer ware, Gems shops and all sorts of handicraft. 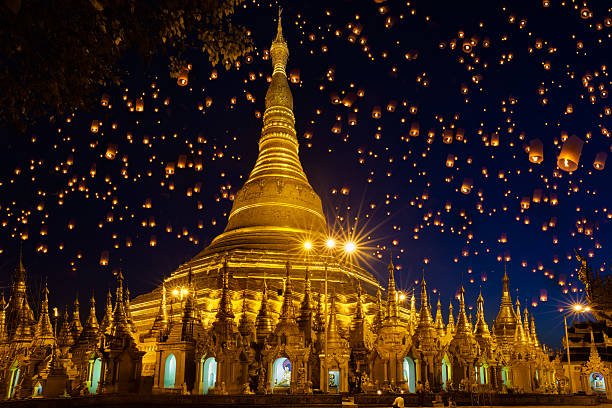 The Shwedagon Pagoda, situated on Singuttara Hill in the center of Yangon (Rangoon), is the most sacred Buddhist stupa in Myanmar and one of the most important religious reliquary monuments in the world. The proposed property includes the hill atop of which the main stupa is located, the hill-top reliquary stupa and associated religious buildings and sacred statuary, bells, and other emblems situated on the hill, as well as the hill’s surrounding sacred perimeter. The proposed property comprises a total area of 46.3 hectares. According to local chronologies dating from the14th century CE, the Shwedagon is believed to enshrine the bodily relics of the historical Buddha, Gautama, as well as artifactual relics purported by long tradition to be associated with the three other most recent previous Buddhas of our present era (kalpa). 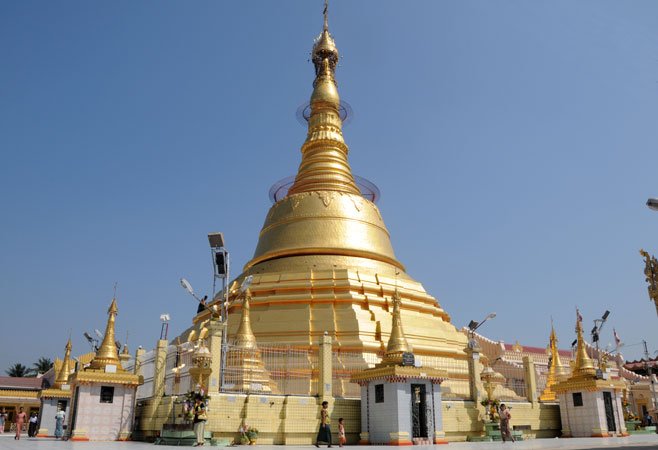 Famous landmark on Yangon's waterfront where one can see Buddha's hair relic and Nanthida Jetty to see people who taking boats and ships through Yangon River.The Botataung pagoda, also spelled Botahtaung pagoda was built some 2,500 years ago by the Mon people. In the second World War the pagoda was destroyed during an airforce bombing mission aimed at the nearby docks. Rebuilding started in 1948 following the original design. In the center of the tiled platform stands the main stupa surrounded by a a number of smaller stupas. The main stupa is the unique feature of the Botataung monastery; it enshrines the sacred Buddha relic and it is hollow and open to the public. 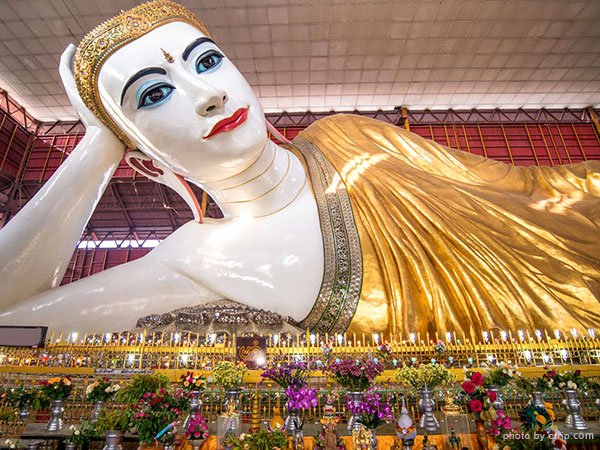 Located on Shwegontain Street in the center of Yangon and only 3 kilometers away from the North East of Shwedagon pagoda. Chauk-htat-gyi Buddha is one of the most famous Buddhist temples in Yangon, known for its largest Buddha image in Myanmar. The enormous and shiny gilded look of this pagoda will make it worth paying a visit. Although Myanmar is a land of golden pagodas and Chaukh. 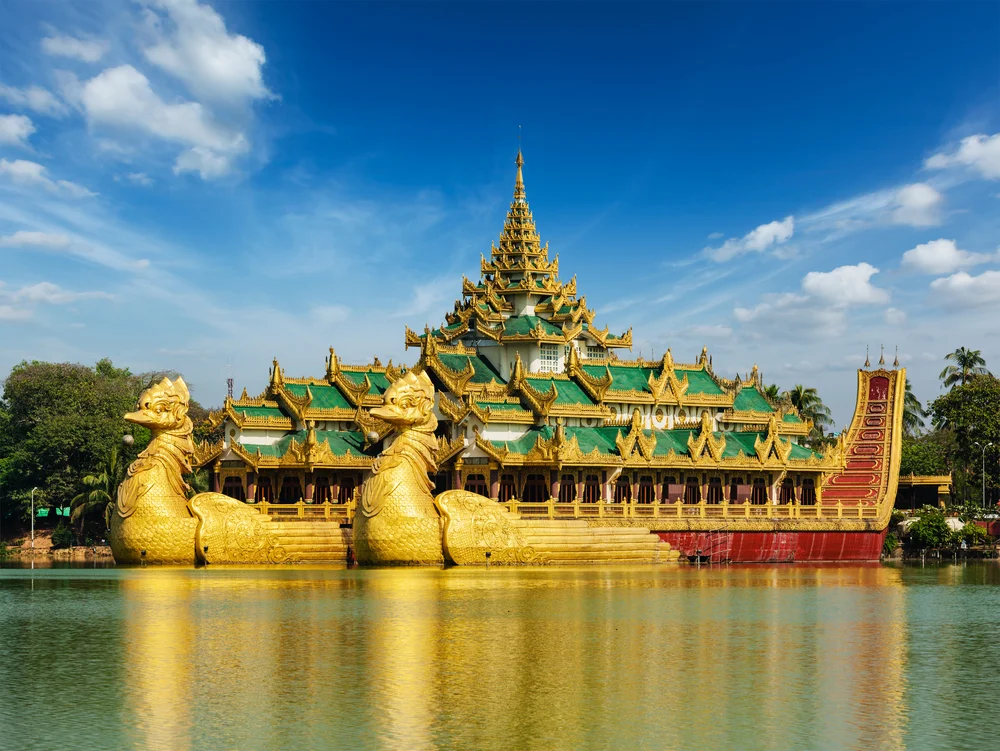 Also known as Royal Lake, this artificial lake built by the British as a reservoir is most attractive at sunset, when the glittering Shwedagon Paya is reflected in its calm waters. The boardwalk, which runs mainly along the lake's southern and western sides (and which is free to wander), is also an ideal place for an early-morning jog or stroll. Just east of the shuttered Kandawgyi Palace Hotel, on the southern side of the lake, floats a Shin Upagot shrine. Upagot is a Bodhisattva (Buddhist saint) who is said to protect human beings in moments of mortal danger. 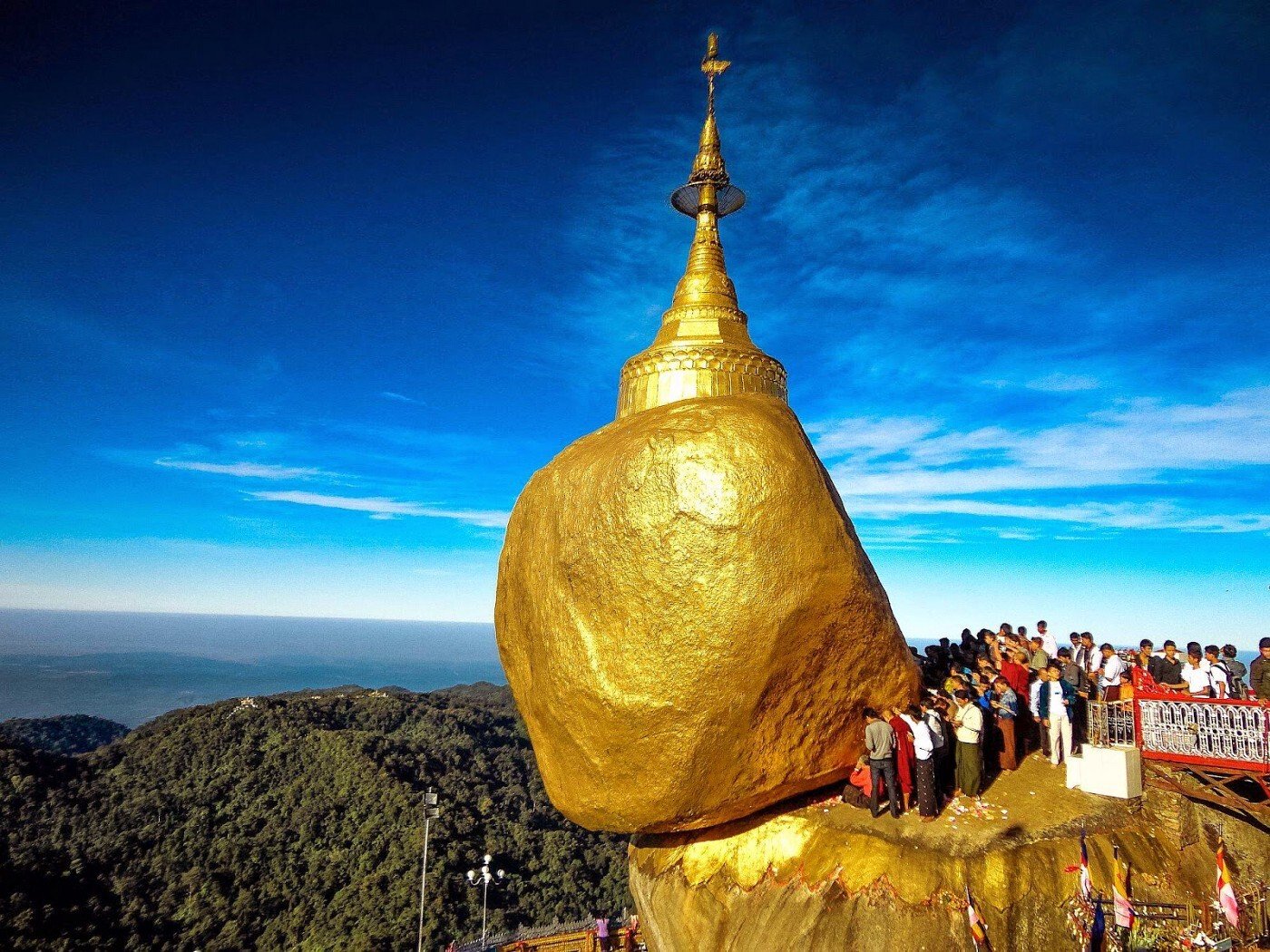 The Kyaikhtiyo Pagoda, also called the Golden Rock is one of Burma’s most sacred Buddhist sites. A massive boulder on the edge of a cliff with a pagoda on top of it enshrining a hair of the Buddha is an important pilgrimage site for Burmese Buddhists. The huge Golden Rock in the mountains North East of Yangon hanging over a steep cliff provides for an amazing sight. The rock that appears to be gold is actually a granite boulder that is covered with gold leaf applied to the rock by Buddhist devotees. 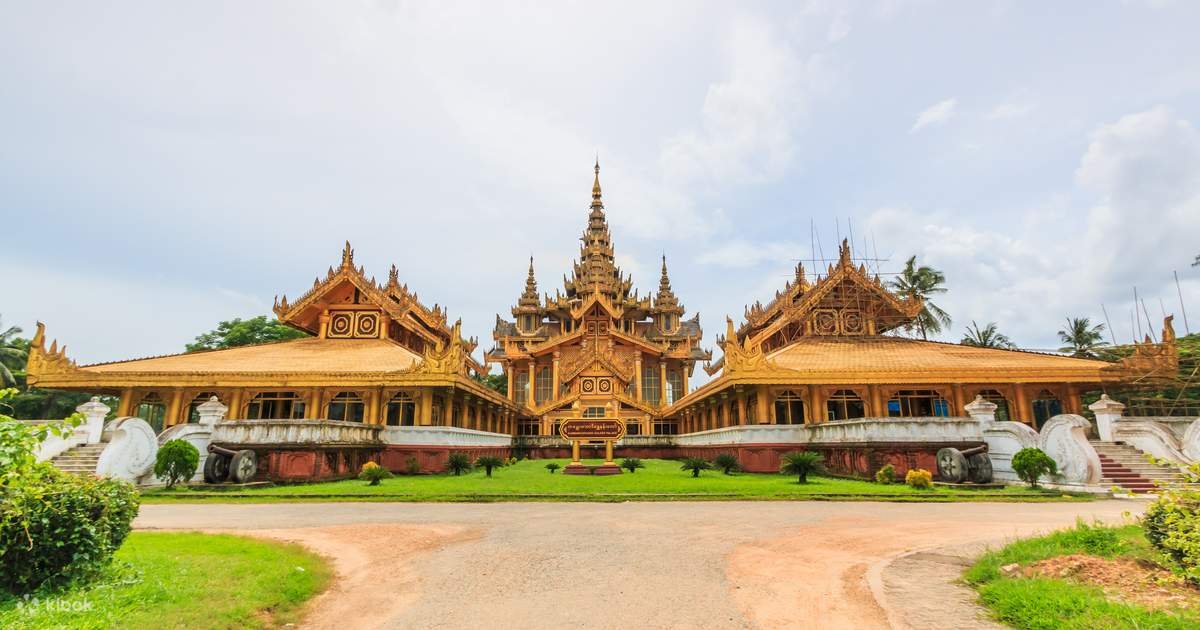 Mon kingdom, also called Hanthawaddy Kingdom, kingdom of the Mon people, who were powerful in Myanmar (Burma) from the 9th to the 11th and from the 13th to the 16th century and for a brief period in the mid-18th century. The Mon migrated southward from western China and settled in the Chao Phraya River basin (of southern Thailand) about the 6th century AD. Their early kingdoms, Dvaravati and Haripunjaya had ties with the ancient Cambodian kingdom of Funan and with China and were also strongly influenced by Khmer civilization. After the Mon moved westward into the Irrawaddy River delta of southern Myanmar in the ensuing centuries, they acquired Theravāda Buddhism, their state religion, from Ceylon and South India, and they adopted the Indian Pāli script. By 825 they had firmly established themselves in southern and southeastern Myanmar and founded the cities of Pegu and Thaton. 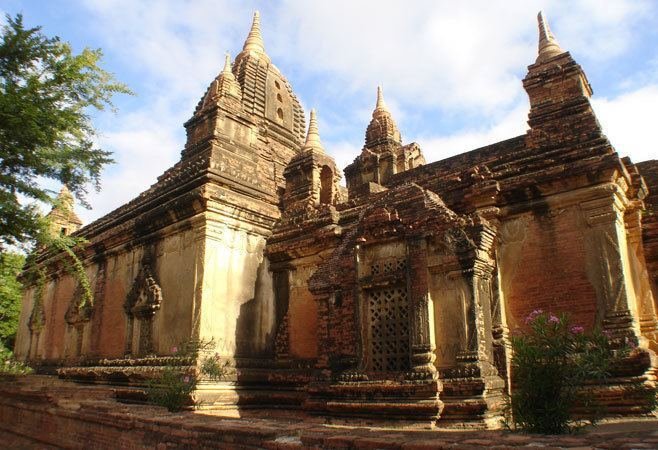 Close to Wetkyi-in village is the 13th Century ‘cave temple’, which has an Indian-style spire like the Mahabodhi Pagoda in Bagan. The interesting attractions are the fine frescoes of scenes from the jataka. 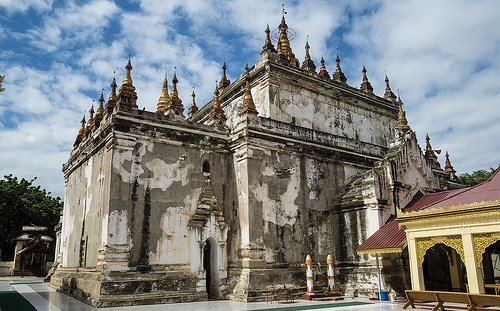 The temple enshrines four large gold painted images of the Buddha, each contained within a separate room, barely large enough to accommodate the images. The front of the temple consists of three rooms, each containing a seated image. The central image measuring 46 feet high is in the “Calling the Earth to witness” posture. It is flanked by two smaller images each 33 feet high. The back of the building consists of a single room, that contains a 90 feet long reclining Buddha image wearing a serene facial expression. 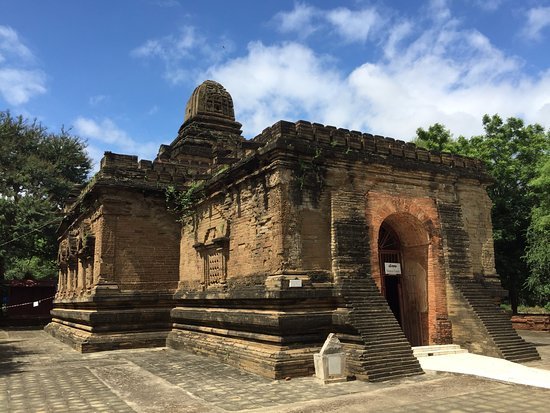 There are perforated stone windows which are typical of earlier Bagan architecture. It also features interesting arches over the windows. Although this religious structure is essentially a Hindu temple it has clearly a Buddhist influence on its motifs like the Kalatha posts with lotus flowers. Probably not the most beautiful temple in Bagan, and clearly not the biggest, but the Nanpaya Temple is full of beautiful stone carvings with some history under the hood. 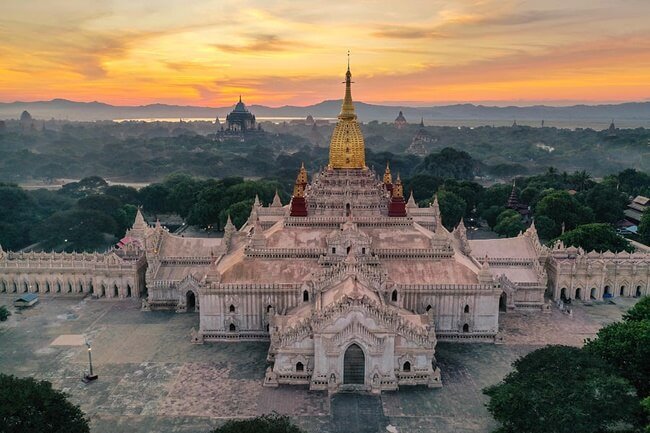 The Ananda temple is one of Bagan’s best known and most beautiful temples. It was one of the first great temples to be build in Bagan and is well preserved. The temple is found near the Tharabar gate, the only gate remaining of the original 12 in the old Bagan city walls. The Ananda pagoda, also named Ananda pahto and Ananda phaya is a single storey structure built towards the end of the early Bagan period. The architectural style shows Mon and North Indian influence.

The Dhammayangyi is the largest temple on the plains of Bagan. From a distance it resembles the early step pyramids of Egypt. The enormous structure that was never completed consists of a massive square base topped by six receding terraces. 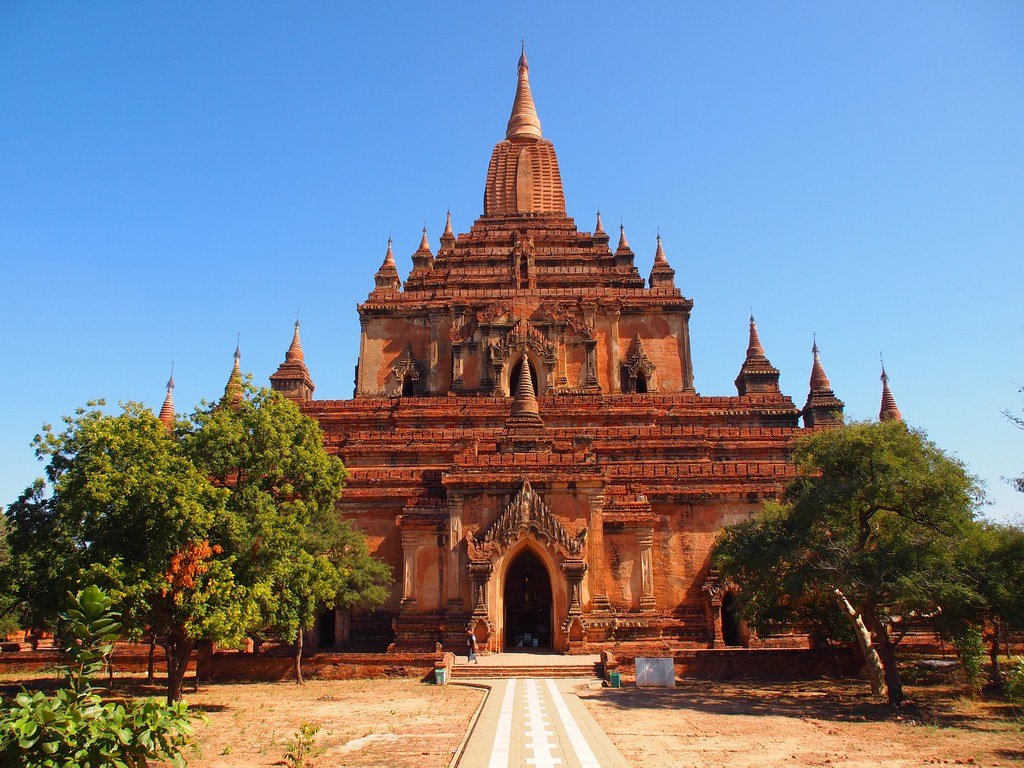 The architectural style has many similarities with that of the Htilominlo temple, which was built a few decades later. The Sulamani is a two storey structure with a square layout. The large first floor is topped with three receding terraces. The upper floor which is much smaller is topped with another four receding terraces. The corners of both lower and upper terraces contain smaller spires. The top of the Sulamani comprises of a shikhara, a tower structure originating from North India. Unlike the one of the Ananda temple, the shikhara is not gilded. On top of that is the hti, a spire ornament shaped like an umbrella. The temple has entrance porches on all four sides. The Eastern porch which is the main entrance protrudes further out from the structure than the others. Apart from this, the structure is symmetrical. 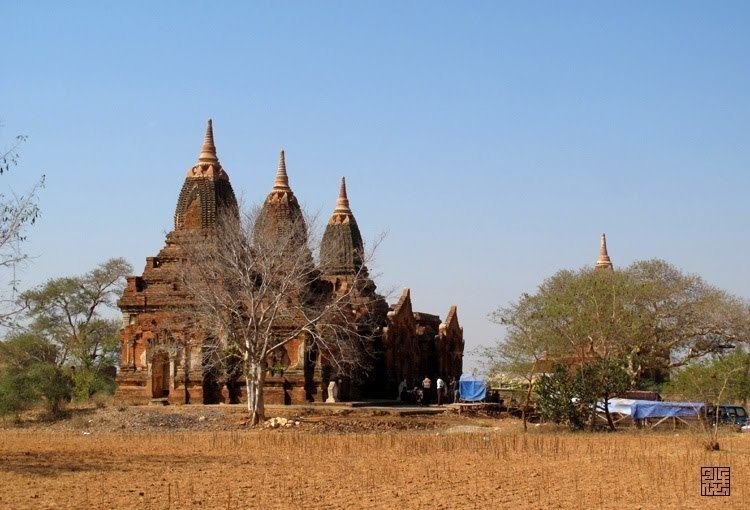 Phaya Thone Zu Temple in Bagan has a rating 3.49 among TOP-100 attractions in Bwasaw, Myanmar. Unusual and intriguing temple Phaya Thone Zu is tryyaday churches united narrow sklyapenchatyya passes. All three temples have the same shape: a square in plan, tapers upward and moving in a stupa spire. Along the perimeter of temples laid small terraces, decorated with turrets at the corners. The exact date of construction is unknown Phaya Thone Zu. It was probably built at the end of the XIII century. The architecture of each of three temples of Bagan typical, but combining them in the triad is unusual for the area. 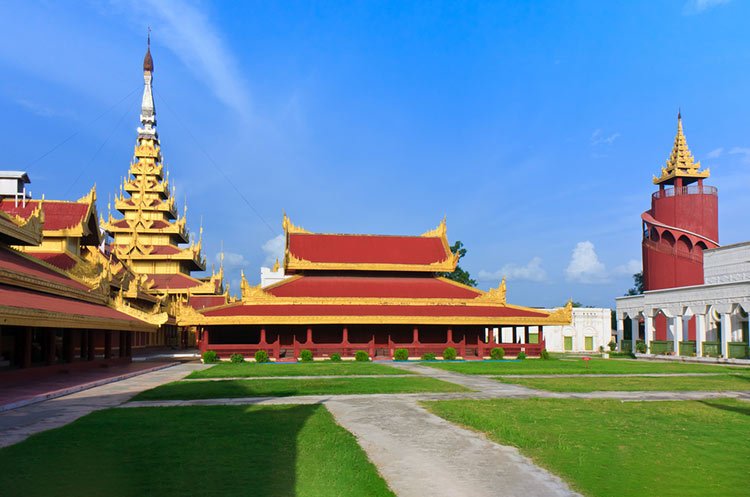 When King Mindon Min founded Mandalay in 1857 he ordered construction of a new Royal Palace called the Mya Nan San Kyaw. The old Royal Palace in the former capital Amarapura was dismantled, transported to Mandalay and rebuilt there. The Mandalay Royal Palace is the last Palace built by Burmese Royals. On the large complex are dozens of buildings including audience halls, throne halls, a monastery, a watch tower, a court building, a tooth relic building and a library where the Buddhist scriptures were kept. 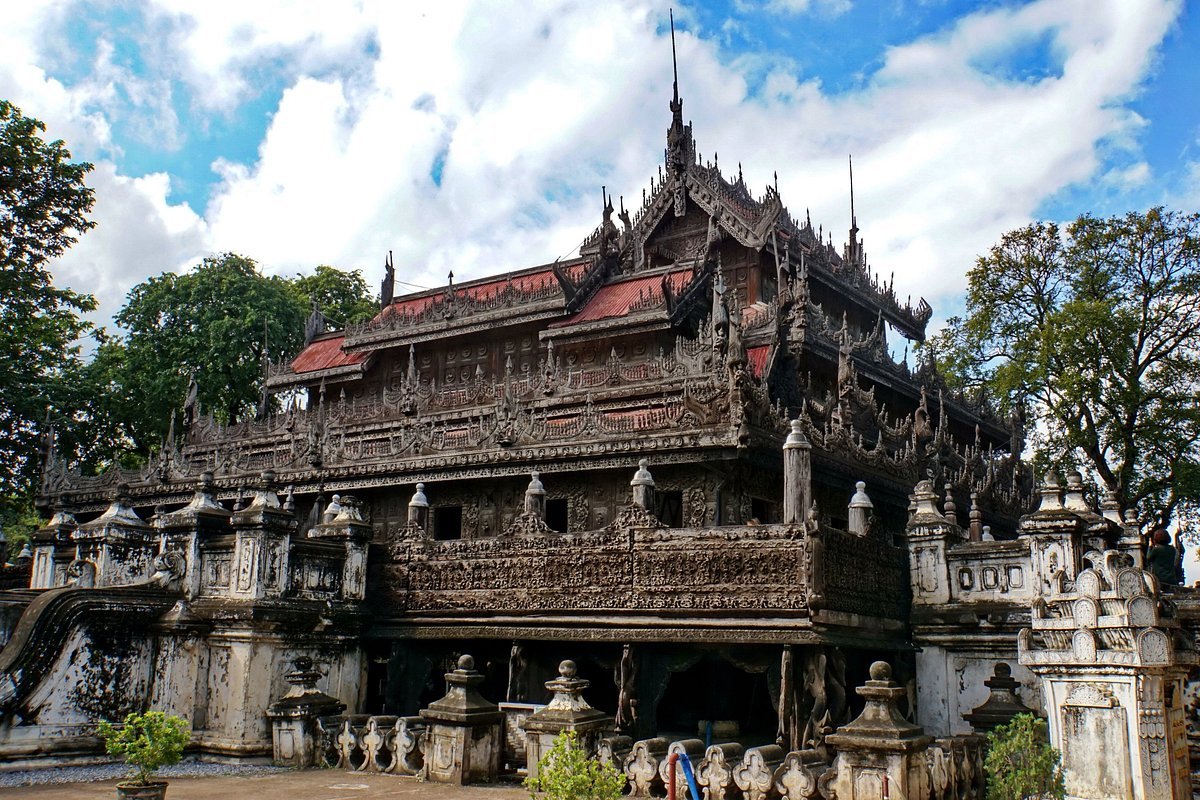 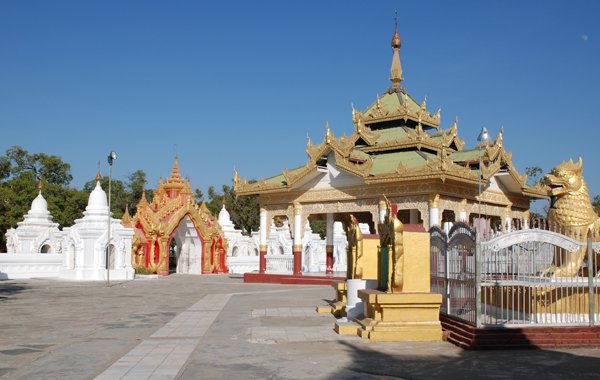 Kuthodaw Pagoda is a Buddhist stupa, located at the foot of Mandalay Hill in Mandalay, Burma. It was built during the reign of King Mindon Min who had the pagoda built as part of the traditional foundations of the new royal city of Mandalay in 1857. Worried that the teachings of Gautama Buddha may be lost to posterity with the invasion of the British to the region, King Mindon conceived the idea of preserving the entire text of the Tipitaka Pali Canon of Theravada Buddhism, by inscribing them in huge stone slabs. Each slab is a meter wide and a meter and a half tall, and 13 centimeters thick, and there are 730 slabs in total. Each stone tablet is housed in its own shrine, called kyauksa gu, with a precious gem on top, and they are arranged around the central golden pagoda. These 730 slabs of marble are figuratively called the “world's largest book.” 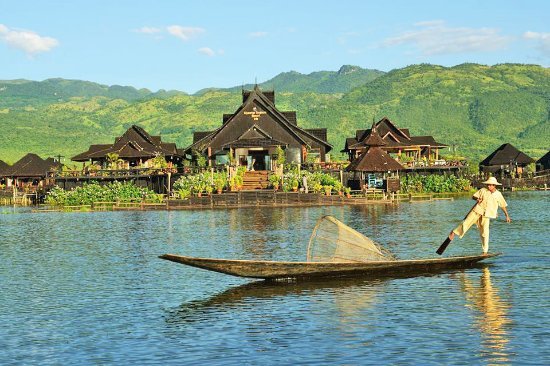 In western Shan State, you will find picturesque Inle Lake, famous for its floating villages and gardens and the unique way of life of the local Intha people, with their living communities based entirely on the water. 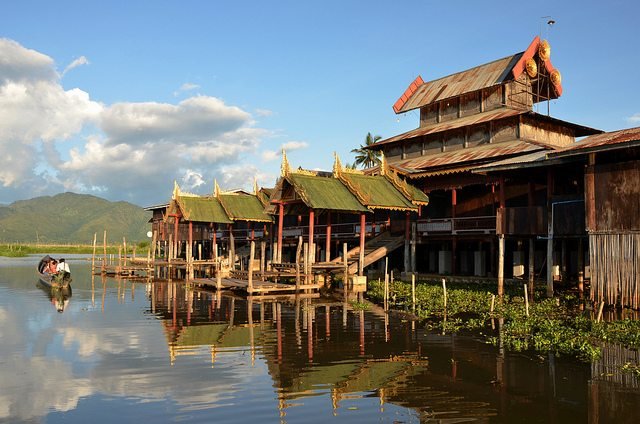 Nga Phe Kyaung Monastery is famous for cats that have been trained to jump over small hoops. There is a tale that one day, when the monk’s mind had fully been enlightened by the Dhrama of Buddhism, he saw a small cat jumping up. Ever since, he has trained about 20 cats to jump through these small hoops. While sailing on the lake near the monastery, tourists can enjoy the cat jumping shows held many times a day. Unfortunately, when the head monk passed away and the trained cats also died or got retired, there is almost no more cat shows to see as the new monk thinks it is improper to train the cats for entertainment. However, tourists can still see cats jumping scenes occasionally coming to this destination. The good thing is they are well fed and get used to human interaction so tourists can feel free to have some cuddling with them when entering the monastery.