PLACES TO VISIT IN MORROCO 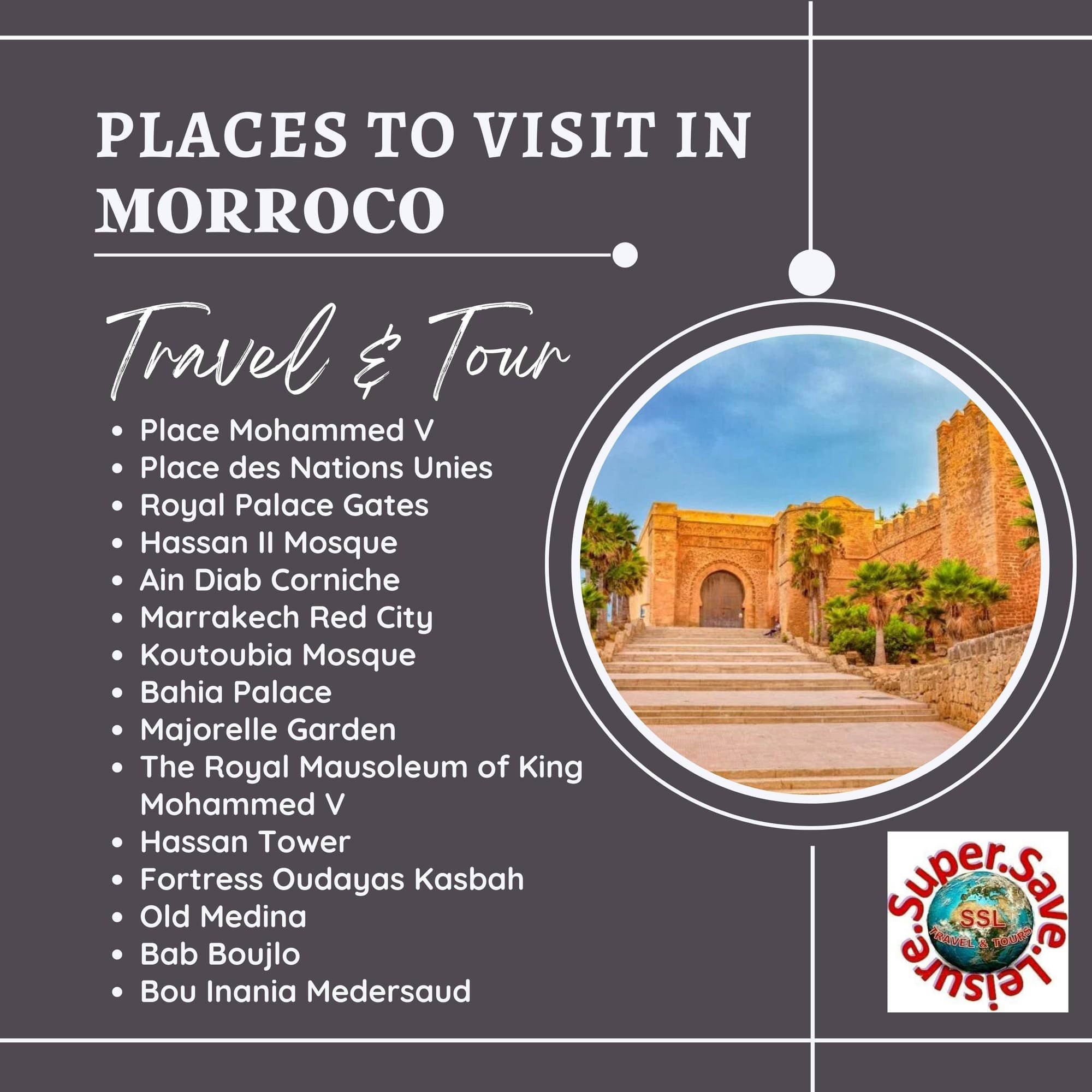 Tourism in Morroco is well developed, maintaining a strong tourist industry focused on the country's coast, culture, and history. 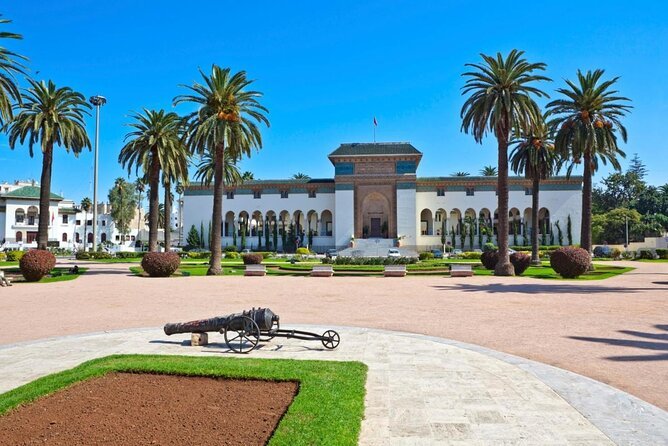 It was built under the French protectorate by architect Joseph Marrast, and it represents an example of the architecture of the 1920s, mingling tradition and modernity.  The square is considered the administrative center of the city, as it brings together plenty of buildings erected after the First World War including the Consulate of France, the courthouse, the prefecture, the central post office, and the bank of Morocco. 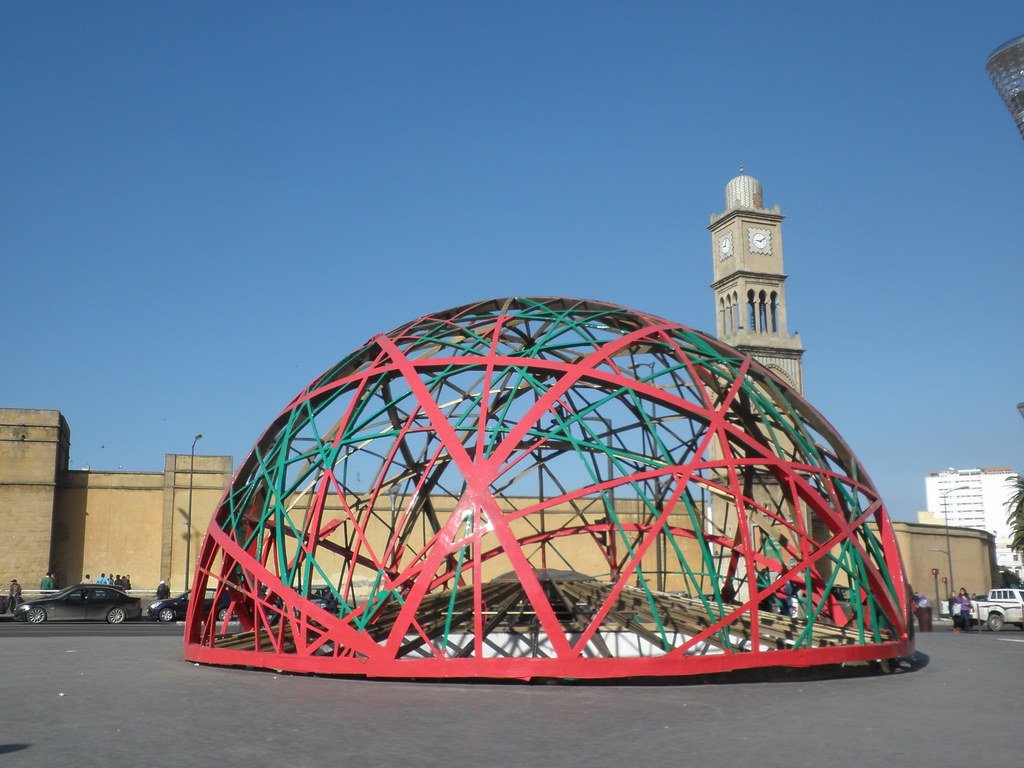 Casablanca’s primary square is Place des Nations Unies. Major roads intersect here like a hub with spokes. The Place of the United Nations is surrounded by major hotels, restaurants and office buildings. The centerpiece is the Zevaco Dome, named after its designer Jean-François Zevaco. The globe-shaped sculpture is colloquially called Kora ardia. In the background is the clock tower of the Old Medina and its western wall. Some of these enclosures date back to the 16th century. 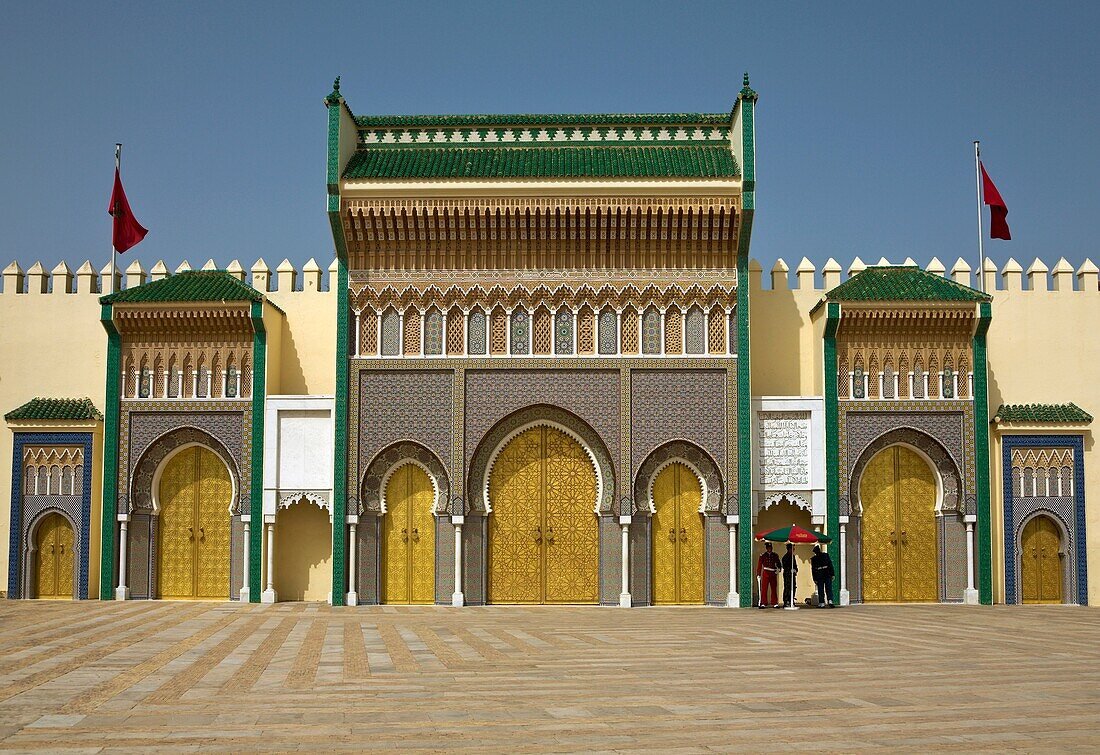 Fes’ Royal Palace, or the Dar el-Makhzen, unfortunately, is not open to the public, but the outside is still worth a visit. The 7 golden gates that mark the entrance to the palace can only leave you imagining how grand it is inside. These famous, beautiful brass doors with matching knockers are covered with intricate patterns and grace the covers of many Morocco travel books. 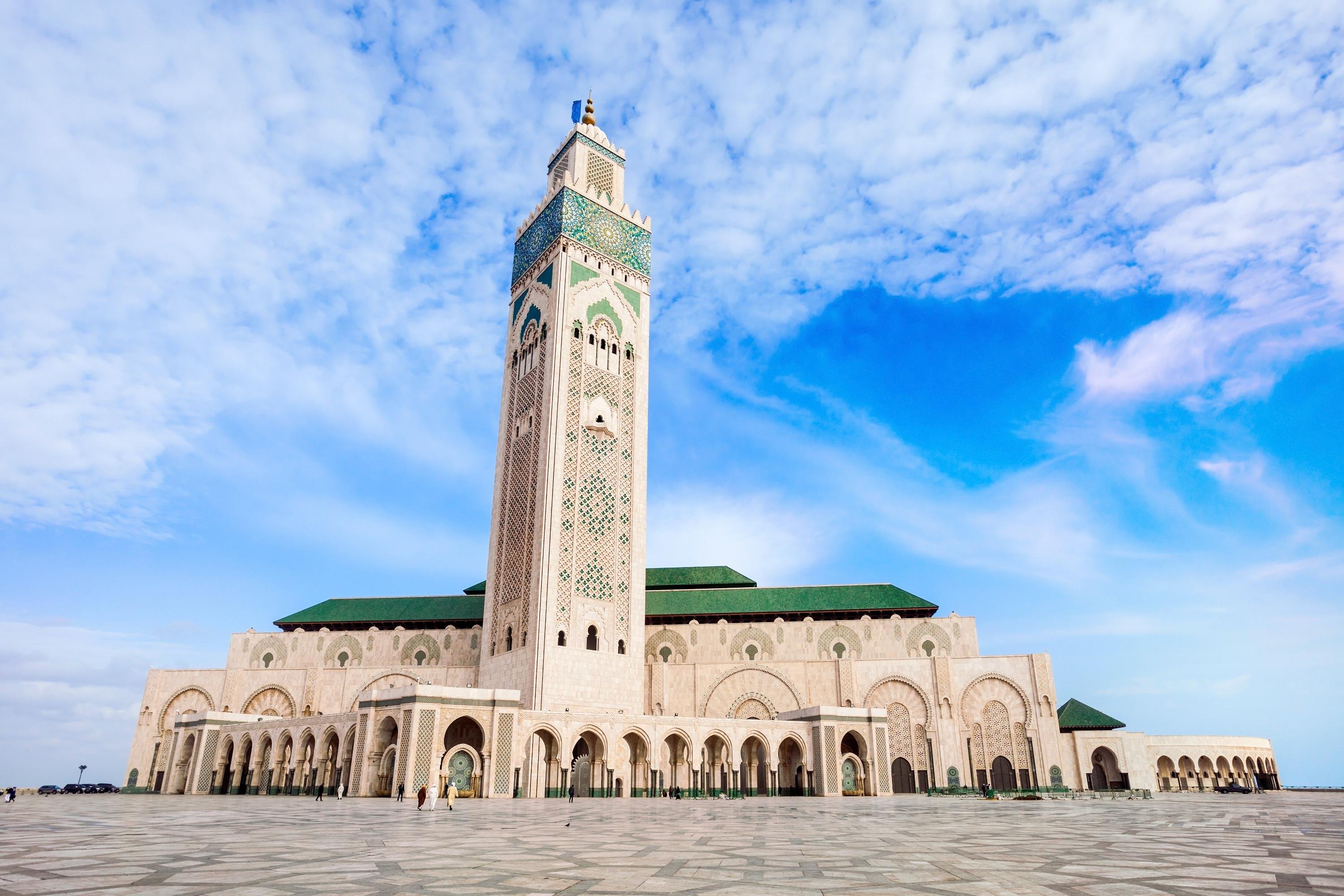 Although it is only the 7th largest mosque in the world, Hassan II claims the title of having the largest minaret in the world. Capped with a spotlight that shines east towards Mecca, the minaret is 700-feet tall, towering above the Atlantic Ocean. Almost lighthouse-like in its position, it is also built directly on the Atlantic Ocean on reclaimed land, which was done with intention by the architect to recall a verse of the Qur’an stating that “the throne of Allah was built on water.” 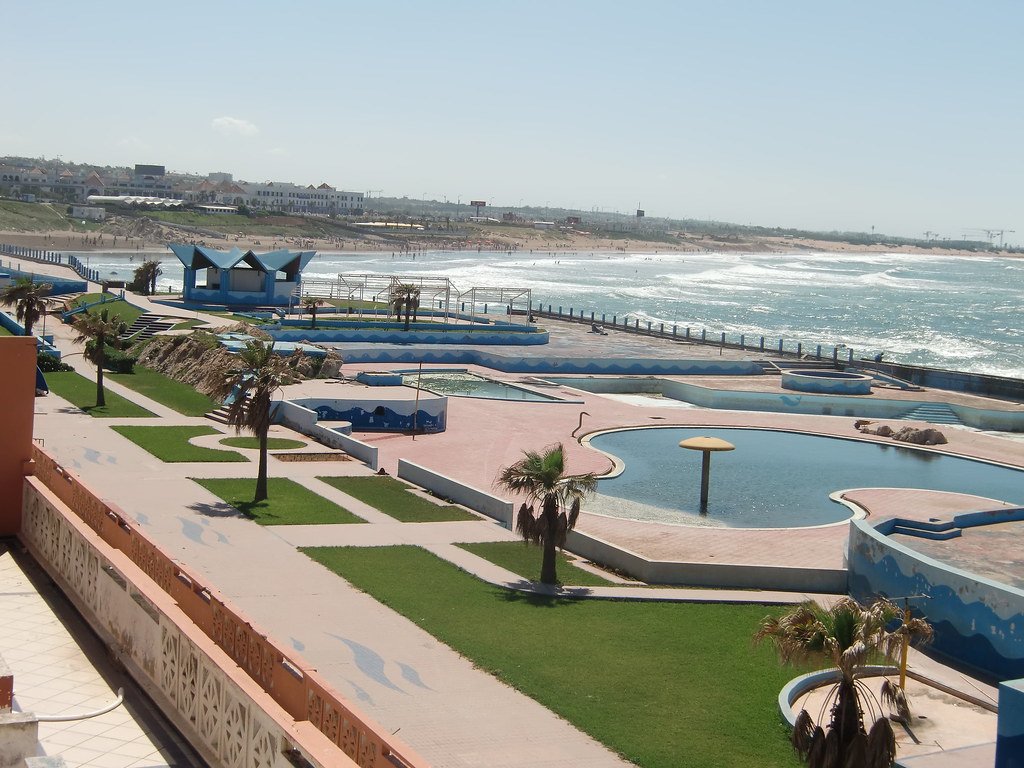 A modern city located by the sea, Casablanca has it all. Stretched over several kilometres, the Boulevard de la Corniche is a very pleasant long avenue where you can walk or jog from the lighthouse to the end of the bay, enjoying the beautiful panorama of the Atlantic Ocean as you go. 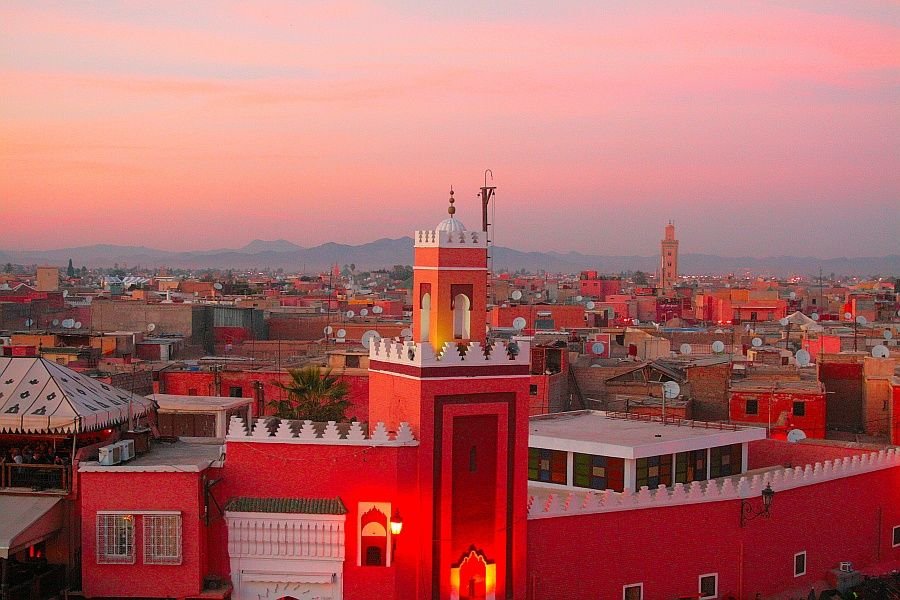 Surrounded by a vast palm grove, the medina in Marrakech is called the “red city” because of its buildings and ramparts of beaten clay, which were built during the residence of the Almohads. The heart of the medina is Jamaa el-Fna square, a vibrant marketplace. 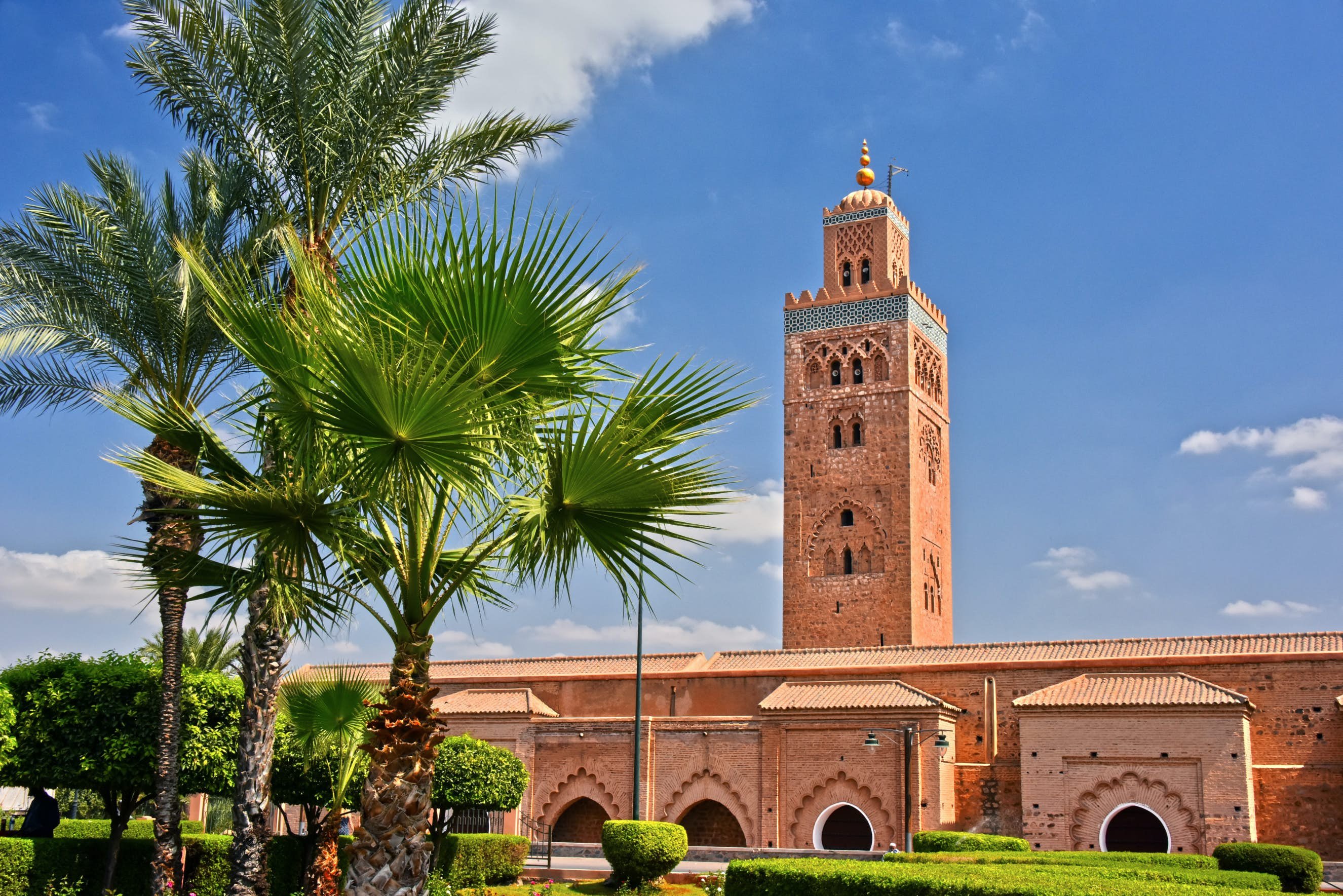 The Koutoubia Mosque minaret is topped by a spire of brass balls. Once made from gold, local legend tells that the balls were "gifted" to the mosque by the wife of Almohad sultan Yacoub Al Mansour, who melted down her jewelry as punishment after being spotted eating during Ramadan fasting hours.Today, the balls are filled with special mineral salt from the High Atlas Mountains, which includes nitrate and magnesium that prevents the spire from oxidizing. The salt is changed once a year, during Ramadan, to maintain the golden glint. In front of the spire, the wooden stick points towards Mecca (all mosques in the Marrakesh medina have this feature) and is also used to bear flags on religious holidays. 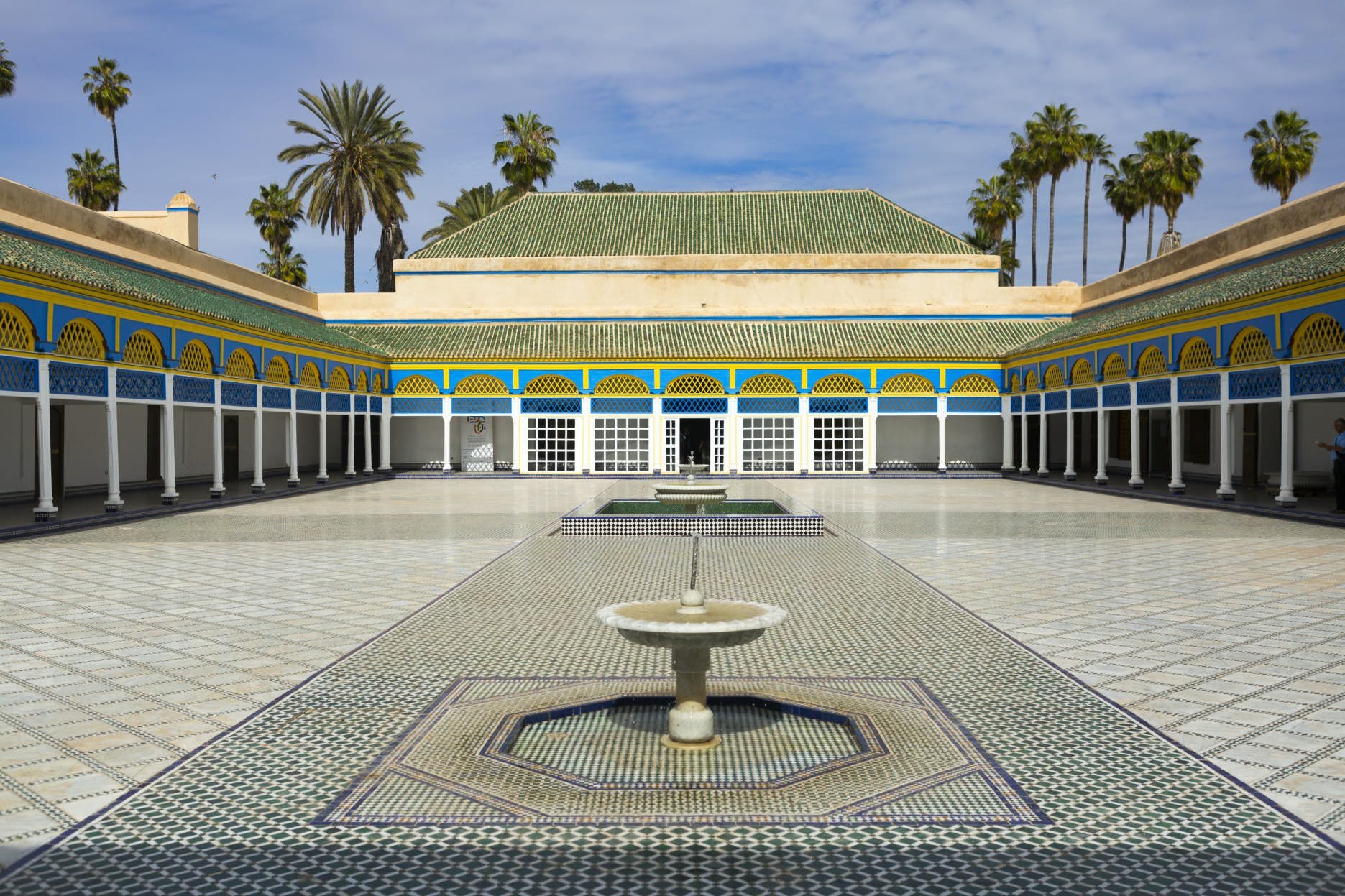 Built by Grand Viziers to be the greatest palace of its time, Bahia Palace was later looted by the Sultan and then occupied by the French. The vast palace still sometimes hosts the Moroccan royal family, but is more typically frequented by tourists who come to marvel at the fine architecture and intricate decorations. Bahia Palace was built in the 1860s by Si Moussa, the powerful Grand Vizier of Sultan Hassan I of Morocco. His intention was to build the greatest palace of its time, a lofty goal that only began to come close to fruition when his son took control of the palace in 1894. 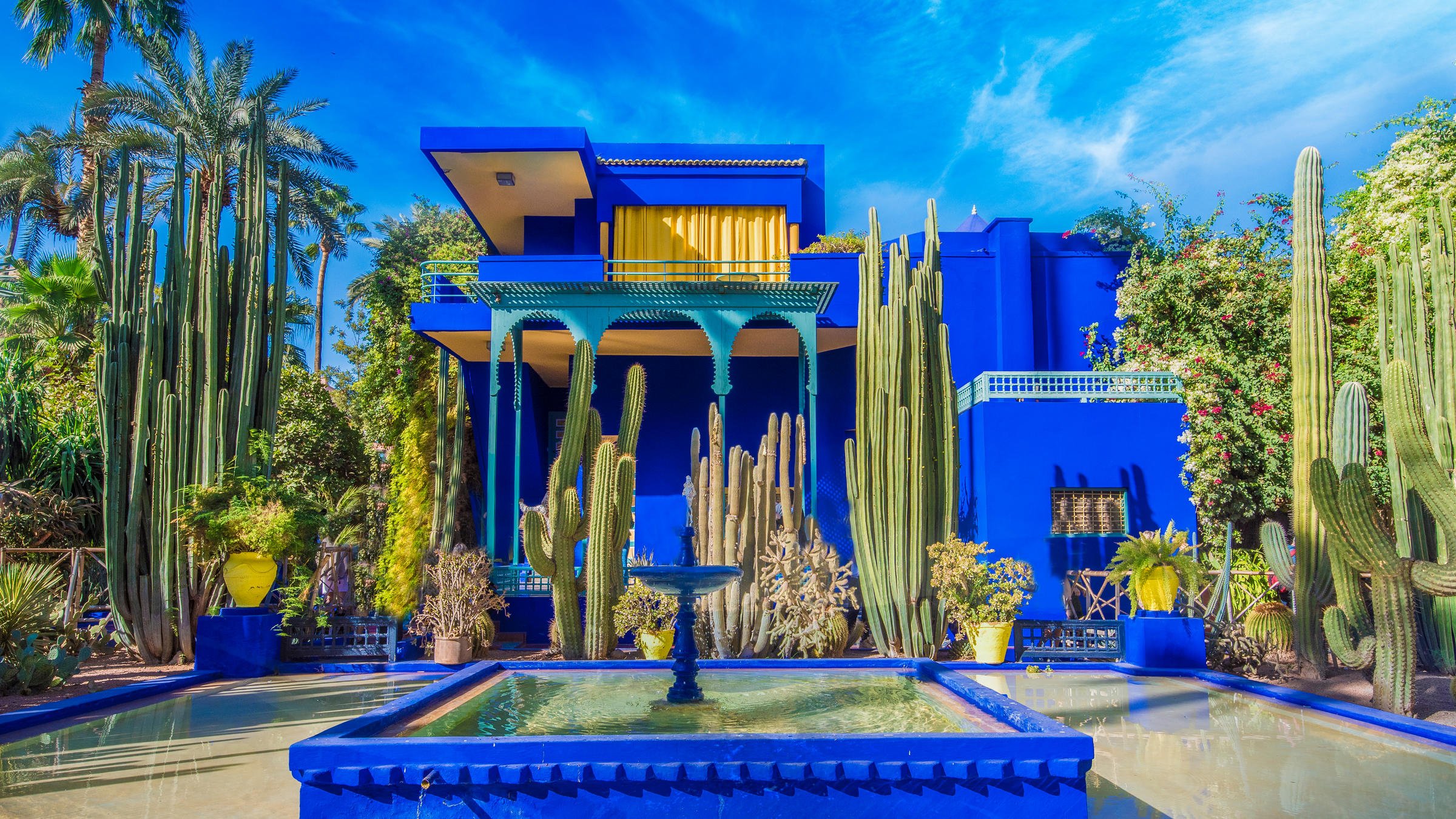 A 12-acre oasis in the middle of contemporary Marrakech, Majorelle Garden has given the world its own vibrant and distinctive color: Majorelle blue. The intense cobalt accents the buildings, fountains, and edges of the garden. Its French creator, Jacques Majorelle, was an illustrator and artist, but this elegant refuge he fashioned in the desert is his true masterpiece. Meticulously restored by its later owners, French designer Yves Saint Laurent and partner Pierre Bergé, it honors Moorish traditions in an intriguing tropical setting. 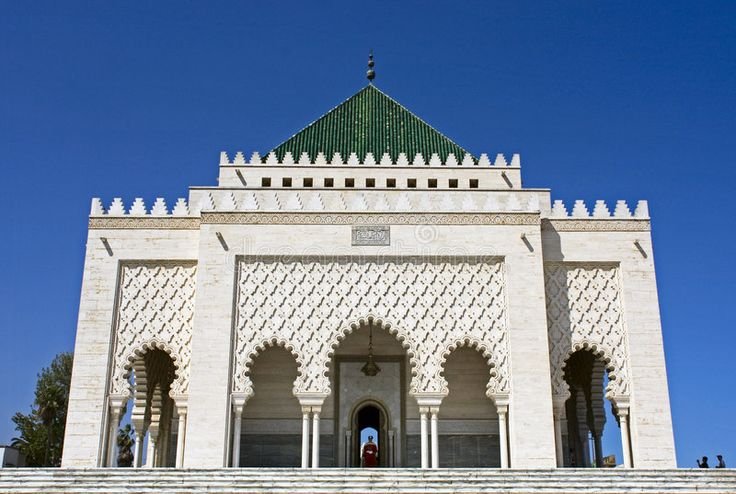 The second is The Mausoleum of Mohammed V the final resting place of three significant members of the royal family standing opposite each other looking out over the Oued Bou Regreg, The Mausoleum is located in Yacoub Al Mansour Square. The Luxurious Tombstone owned to The King of Morroco and his sones, King Hassan II, and Prince Abdallah. Sultan Mohamed V ruled Morocco for two separate reigns. The first, from 1927 to 1953 and the second from 1957 to the year 1961. He is noted for his struggle for Morocco’s independence. King Hassan II commissioned the construction of the Mausoleum of Mohamed V in the year 1962, and in 1971 The luxurious structure was completed. The Royal Structure was envisioned by Vietnamese architect and built by local artisans, it's said that it took 400 men to complete the mausoleum. 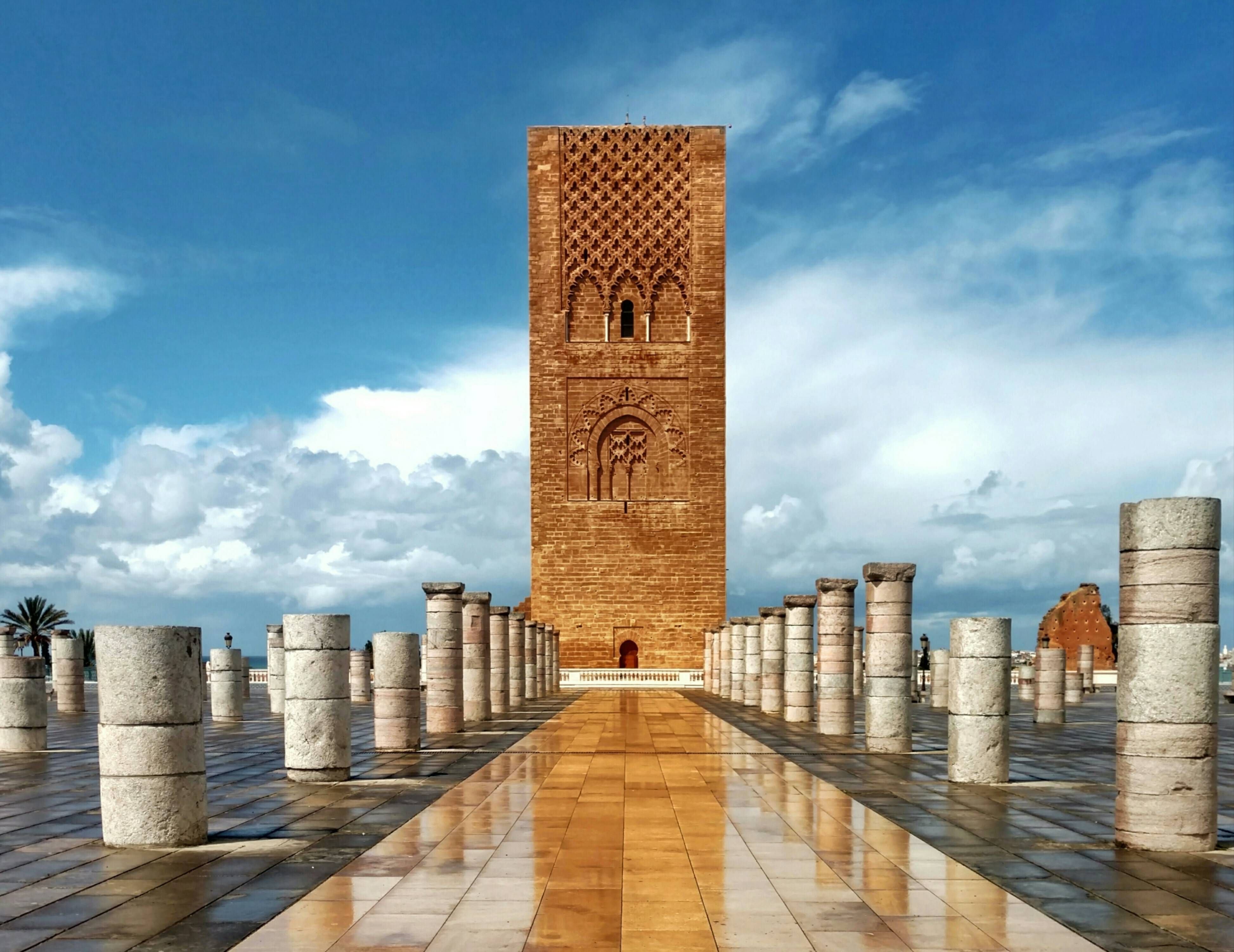 Hassan Tower or Sawm’at Hassan in Arabic, referring to the significant minaret shaft following the special Moroccan and Spanish style of architecture of the same time. The minaret was projected to be the largest of its type of all time around the world, yet – unfortunately – the construction processes stopped suddenly following the sudden death of al-Mansur in 1199.
The red-sandstone building of Hassan Tower is rising with 44m with about 86 height. Accompanied with few columns once set before the work being abandoned in the mosque. In the near surroundings lies, Mausoleum of Mohammed V, with the tower and mosque prior work forming a noble complex adding a prime value to the city – Rabat- historical architecture. 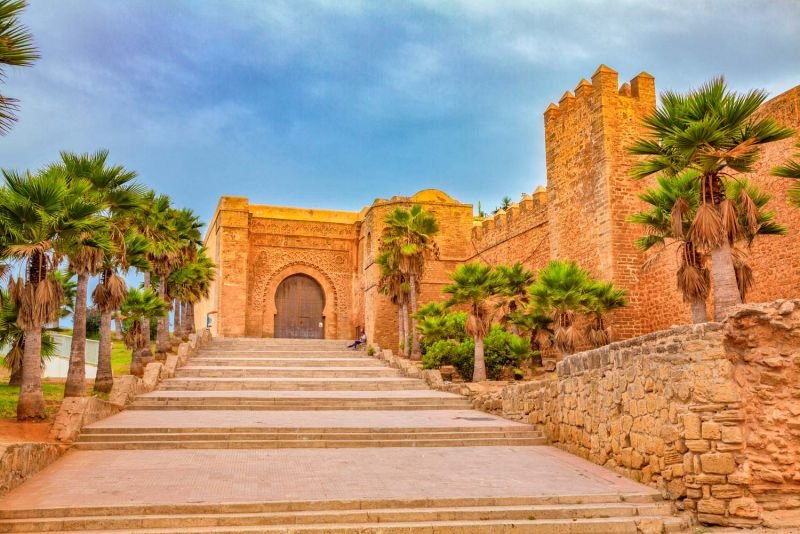 The Kasbah of the Udayas (Oudayas) ancient fortress in Rabat in Morocco, the capital of Morocco. the Almohad gate Bab Oudaia front of fortified wall. 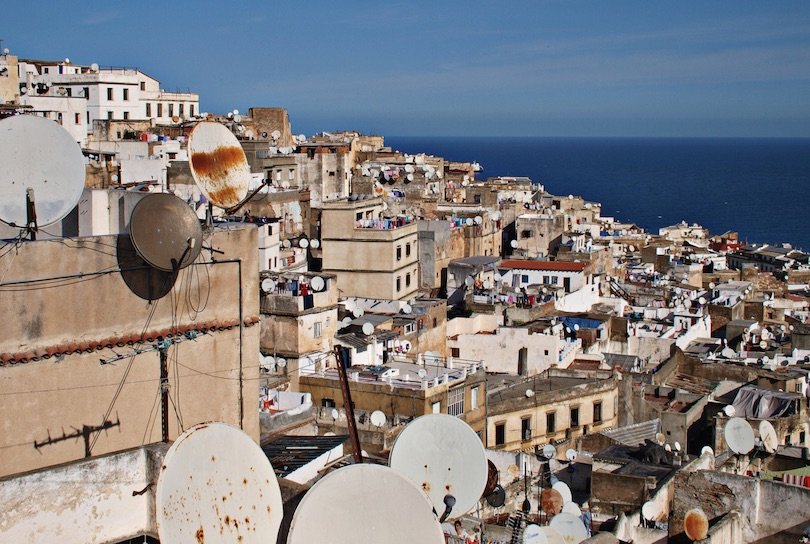 A medina is the old part of a town or city, found in many countries of North Africa, not just Morocco. It is typically walled, and contains narrow streets, fountains, palaces and mosques. Many medinas are car-free as there is not enough space in the alleyways for cars to pass. The word "medina" means city or town in modern-day Arabic. 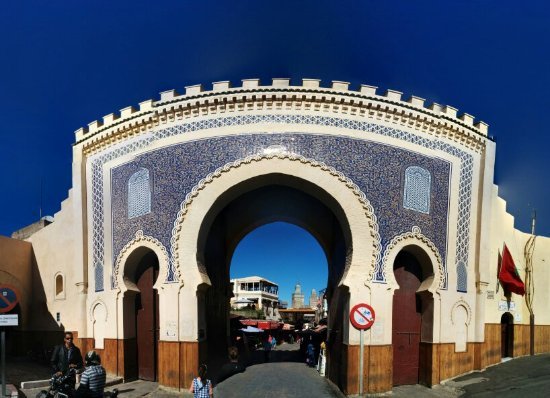 No one visits Fez without passing by Bab Boujloud at least once. It is virtually impossible, as the gate (bab in Arabic) serves as an excellent navigation point for the lost wanderers trying to find their way through the busy streets of the Fez medina. But Bab Boujloud is much more than just a handy reference point on a map. Its glittering mosaic tiles and grand archway have made it one of Morocco’s most famed gateways and a sight you definitely won’t want to miss as you discover the city of Fez. 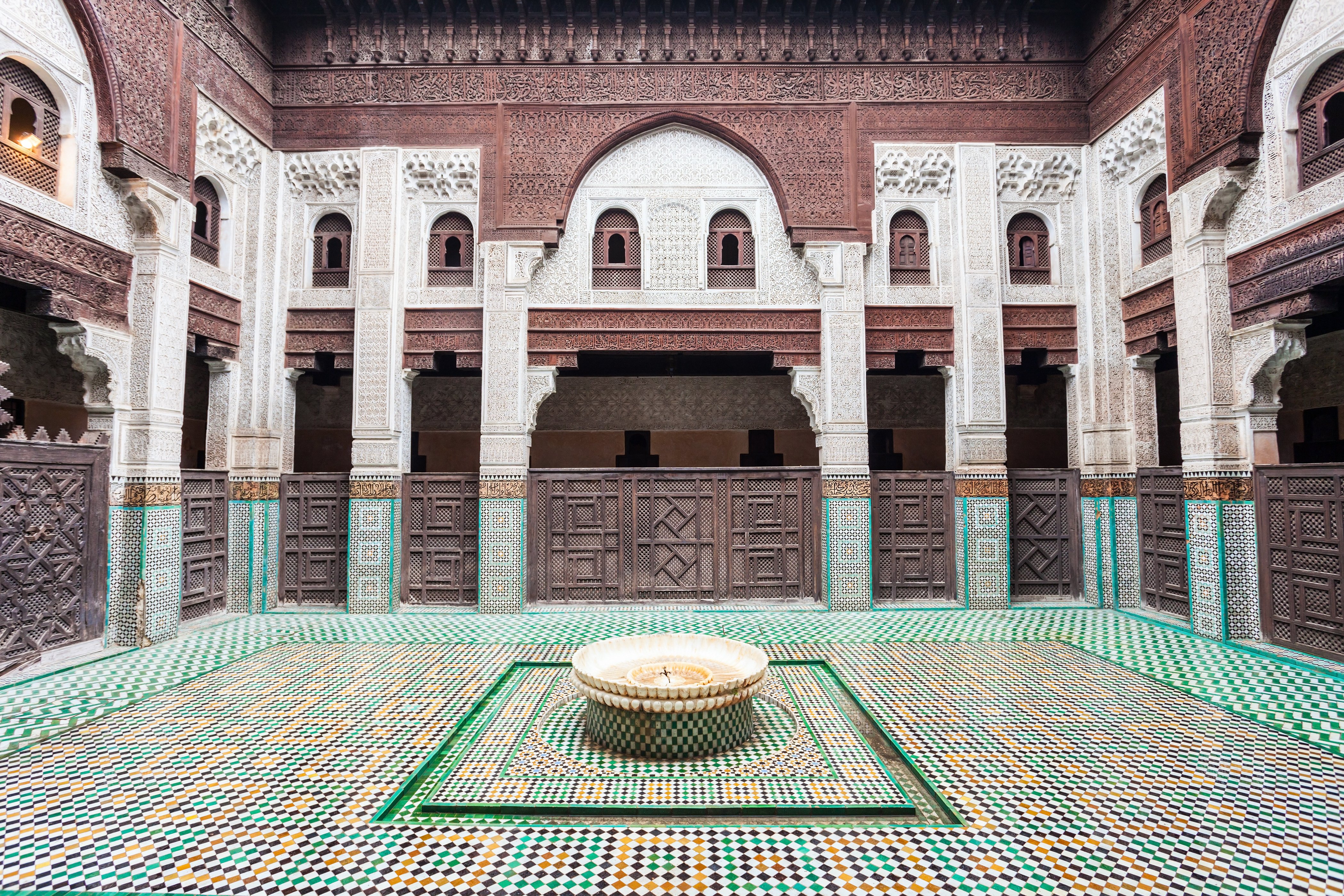 Most madrasas have a small prayer room, but Bou Inania has a full-fledged mosque with a minaret. Normally madrasas were built near an already established mosque and the two institutions cooperated closely with each other for both religious and educational activities. But since there was none in the area, Bou Inania has the rare distinction of housing a sumptuous mosque within its confines.Because of its unique history, the Bou Inania Madrasa holds the status of a congregational mosque, the only such one in all of Morocco housed in a madrasa. Congregational mosques or Friday mosques are where the most important prayer session of the week takes place on Friday and brings together all the faithful from the many other mosques in the area.